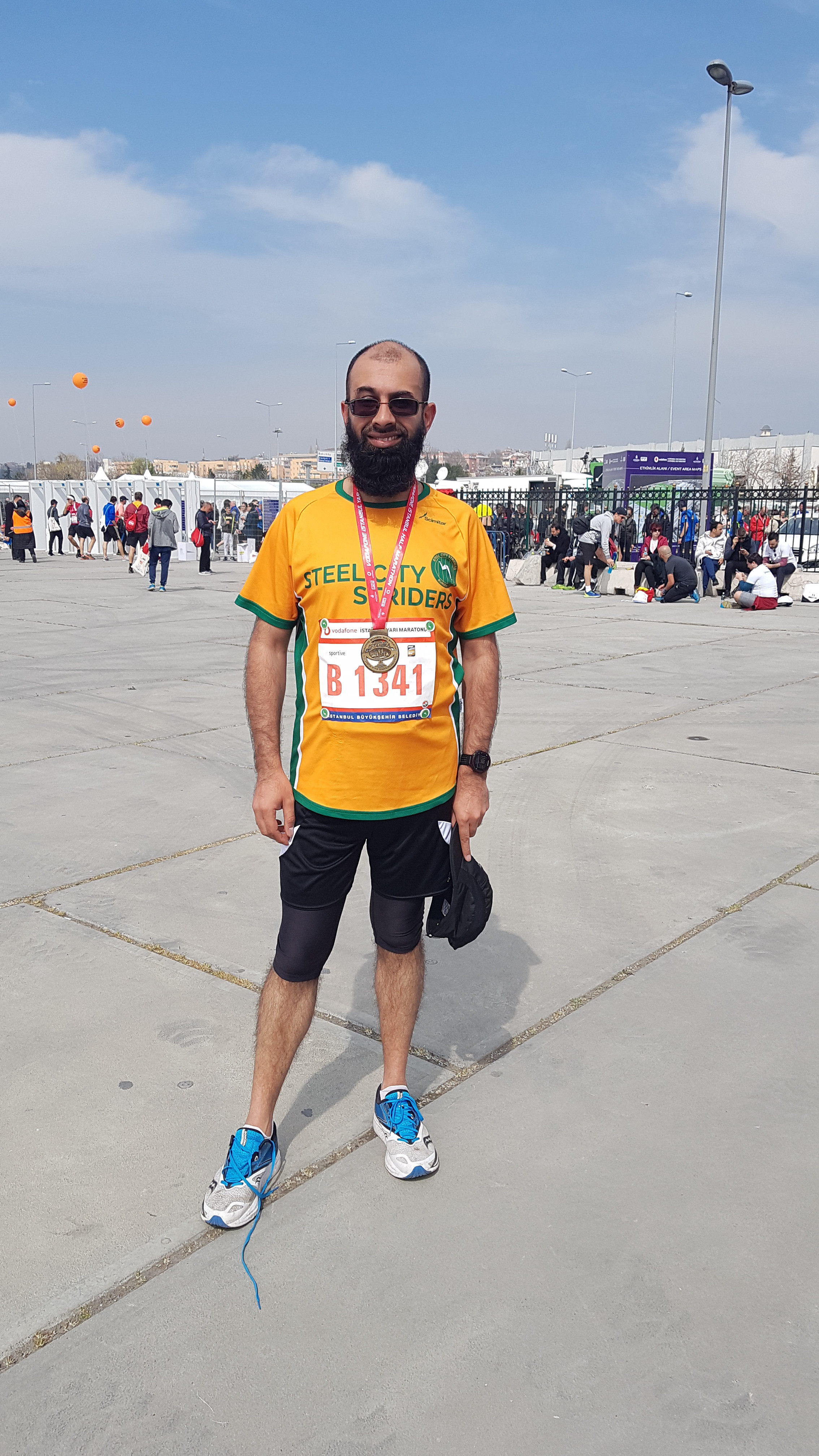 This was my first race overseas, hoping to combine a holiday with a race. I was in the process of booking my holiday to Istanbul, and by someone mentioned this HM to me. It was to happen 2 days after I was potentially to come back from holiday. I then decided to shift my holiday by 2 days to incorporate the race, and therefore transfer Dronfield 10K to someone else.

The week went pretty quickly, with lots of walking to go to all the different sites that the old city had to offer. It was a brilliant week, where the whole family enjoyed the culture and the sites had to offer. The big change for me was the diet, both lunch and dinner was all kebab fuelled. My biggest worry was, will these kebabs be the right thing for me to perform well at the HM at the end of the week.

So moving onto collecting my number from the Expo, we had to take a trek to the outskirts of Istanbul to a shopping center. The expo was only 2 desks, one for the number, and the second for a bag, t-shirt and various pamphlets. I wonder now what other expos are like, as I was expecting more than just that.

Coming to the race day, my family decided to take the day off, and stay indoors and take a break from all the walking from the week; especially the fact they could see the road from the hotel room, on where the race was being held. The starting point was about 30 mins walk from the hotel, so took a steady walk down to the start line. I was early as the baggage drop which closed early at around 08:15. So after a quick warmup for ~20 mins, was ready to pound the streets of Istanbul.

My main aim for this race was to take it steady, and would be generally happy to come away unscathed, with no knee pain; especially the fact after 10 miles the weekend before.

I started in the second pen, only because when I entered I entered an estimated time of 01:40. I knew I was not in a fit state to achieve that but they wouldn’t allow you to move pens. The elites started the race 15 mins before us, and the 10K runners were starting ~15 mins after us.

The race started pretty well, and a lot better than expected, and looking at the watch at 3-mile mark suggested that I could be on 01:45, which considering the issues I have been having would be a great result. Getting towards mile 5/6 mile markers, I started to struggle with a stitch, which really drained me. Then getting towards where the 10K guys were turning off to the finish, I was just thinking, “I’ve had enough, I want to turn off with you guys”. I just had to grit my teeth and keep going; it felt like I had no energy at all to keep going; I felt no motivation at all. Maybe this is the kebabs talking, and the lack of fueling that was provided by them. Up to this point, my watch was starting to show 01:47 for ETA; but I knew that I would need to slow down to maintain the next 7 miles

Over the next 7 miles, there were many stop starts due to my knee not behaving. But one thing I do have to remember for London is that I should not stop for too long, as getting started again is even more difficult.

The overall atmosphere of the race was pretty dull, and not much support on the course. The best-supported places were at the drinks station, where everyone was shouting ‘Bravo’. But, the best place was at the end, where the crowd was on the road, and pushing people along, and shouting; this reminded me how crowds get onto the road at the Tour-de-France. It was actually cool and did spur me on for the last 300 metres.

Finally, I was absolutely chuffed to have finished the race in a time of 01:53:49, and was looking forward to my well earned hot shower and relax for the afternoon.

Would I do it again? certainly, it is pretty flat, considering our hills in Sheffield. The cost of the race itself is actually negligible (50 TL ~= £6.60). I guess compared to other European countries the accommodation and flights would be quite expensive. But if you ever pondering of going to Istanbul at a similar time for a holiday, then the race is well worth it, whether it’s in the beginning or at the end. I would probably do it first so that the kebabs don’t adversely affect my fueling.